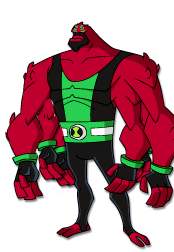 Sixarms is the eighth alien that Len 10 changed to. He is a Tetramand which has been renamed Sextamand because of their adaption with six arms and one of Len's most used aliens. Tetramands have changed over the years because their homeplanet, Khoros, has changed and has become even more rough. They now have two retractable arms coming out of their backs. Their skin also is now orange. Len likes to leap nto the air, grab a horizontal pole with his two back arms then smash to the ground while clapping his hands hard. This makes a shockwave that is strong enough to knock over anything other than Vilmax.They also have thicker strong armor skin equal to 999 quinzillioned times the original strenght of the tetramands armor skin and the ability to grow spikes on any part of their body, and six golden eyes that have the ability to fire golden energy blasts.
Retrieved from "https://ben10fanon.fandom.com/wiki/Sixarms?oldid=5860"
Community content is available under CC-BY-SA unless otherwise noted.